We awoke to a winter wonderland, it was as if a powder sugar shaker had dusted the surrounding area in a fluffy white sugary coating over night. We drank our coffee ☕️ in the front seats of the van, as the purr of Dory’s engine gently warmed our toes and legs. Pulling out our trusty atlas from behind the driver’s seat, and with the aid of google’s maps satellite view, we began planning our route for the way. We were escaping cold weather further north, honestly trying to avoid snow, though we were delighted to see the small snowfall that had accrued over night around us. We would avoid highways, taking the backroads through a national forest to get to our destination. Little did we know this would not be our best option.

All morning we slowly meandered through the public lands backroads, stopping to gawk at the beauty of the Colorado Juniper’s and Pinyon Pines dusted with snow. We pushed Dory’s engine up and down hills of varying sizes, in complete awe of the scenery around us. Eventually we hit a detour, arriving at what used to be a public road and what is now the entrance to a private community. We laughed with the gate man and decided to push forward on alternate roads we could see on google maps satellite view. 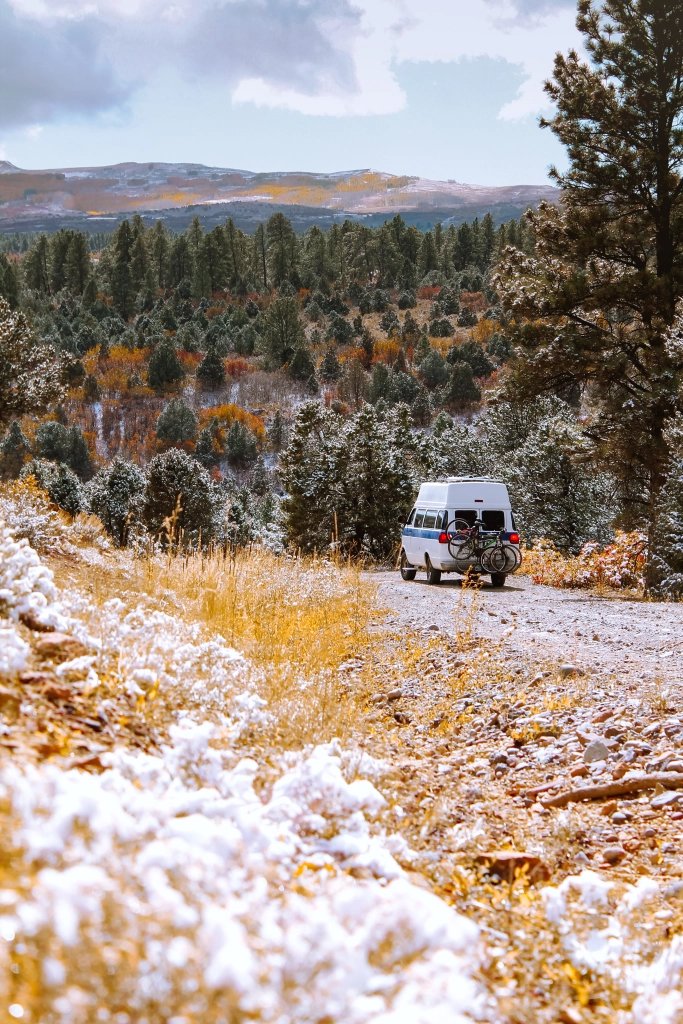 The rocks were getting bigger, much bigger than they had been on the dirt roads leading up to this point. We could feel Dory’s suspension not getting a kick out of the journey up to this point. We popped back into the van, figuring it was about lunch time and that would give us a bit of time to mull over a decision. The road was intimidating. Steep and rocky, and at an incline Dory might not appreciate.

We heard a rumble in the rocks and looked up to see a small jeep bounding down the road coming from the other direction. Flying over the road with ease, I climbed up into the passenger seat to get a better look. The jeep pushed forward coming up the final ascent of the hill at which we were perched atop. The man driving nodded, looking over the van, his face said ‘maybe not the road for her’ but he continued down the road holding his cracked smile.

After a bit more food and coffee to refuel we made the decision to push forward. To see what the three of us could really do.

To say it was rough, would be an understatement. Dory’s suspension bounced and bumbled over the steep rocky road, always in control but definitely not happy about the rough road. After we reached the bottom, we turned to each other, saw that we both had white knuckles and knew we had to turn around and not attempt proceeding up the next hill which had bigger rocks and dips. Dalton managed a tight three point turn and took a couple of deep breaths as he attempted to drive back up the steep graded jagged rocky road. Dory’s engine purred, and the suspension bounced over the rocks all the way up, we kept repeating her theme song mantra “Just keep swimming, just keep swimming “ as her engine chugged its way back up to the top of the hill.

Dalton got out of the van to look over the vans suspension and he didn’t notice anything wrong. So we drove for another 3 hours, back down the mountain and back every road we had just made it up. The mood in the van was tense but we were happy to have maken it off that dirt road without a mechanical issue… so we thought…After making it to the highway we decided to drive the hour and half to get to where we wanted to make camp.

It wasn’t until the next morning that Dalton had noticed the passenger wheel didn’t appear level. He crawled on the ground to get a better look and he said “Its for sure broken” The Ball joint on the upper control arm looked as if it was going to fall out! Figuring we drove on it for so far the night before we figured we would just drive the ten miles to the closest town to get a part ordered.

We hit the road and headed from our cozy campsite in the woods to Cortez, Colorado, not realizing that we would be spending almost an entire week there. Upon arriving, we checked out the three auto part stores in town to see if they had the parts we needed for our nearly 20-year-old van. Unfortunately, we were not surprised to find that they did not have the parts we needed. We had to weigh our options and decided to order a new upper control arm from the O’Reilly auto parts store right next to the parking lot where we were staying. After waiting for what felt like forever, but was really only two days the part arrived. However, when the part arrived, it was not the upper control arm we had ordered or could use on our model Dodge Ram Van. We had to wait three more long days in the hot sun, parked in the back corner of the walmart parking lot, for the correct part to arrive. To pass the time, we took long walks around the edge of the town and back, visited all the parks, and made sure to stop in all the ice cream places.

Finally, the parts (including control arm) we needed arrived and Dalton then spent hours wrestling with the old control arm to get it off of the van’s old body and doing some classic Our Home On The Move parking lot repairs.

Tp get the job done we ultimately had to make multiple trips to different hardware and auto stores to borrow tools, but eventually, we got the old control arm off and the new one safely installed. The next day, we were able to get a front-end alignment at a nearby shop, but truthfully it wasn’t the best alignment, and we were nervous as we saw the guy agressively banging on the control arm with a sledgehammer rather then making the necessary adjustments… We ended up getting a new alignment not too soon afterwards, after we had crossed through the Colorado desert into southern Utah. After an exciting and very long, hot, sweaty work-filled week in Cortez, it was time to move on to the next town and the next adventure in our vanlife journey.

2 thoughts on “From Vanlife Dream to Vanlife Disaster: Our First Big Challenge On The Road”